Recently Apple announced a bunch of new things in WWDC22. Among many things that Apple unveiled, the iOS 16 and macOS Ventura stole the show. Apple introduced the next big iPhone update – iOS 16, and it brings in a plethora of new features.

We have already discussed the iOS 16 features in detail. Now that iOS 16 is official, it has left many users speculating whether their iPhone will get the iOS 16 update. Hence, if you are an iPhone user and think the same, this article might be helpful.

The new announcement of iOS 16 might disappoint a few users, especially those running older iPhones. While OS updates were significant, they also put an end to older devices. And this time, it looks like Apple has gradually made its plan to kill a few older iPhone models.

The latest iOS 16 will only support iPhone 8 and above devices. This also means that iPhone 7 or older iPhone series will not support the new mobile operating system. So, if you are using iPhone 8 or above, you will get the iOS 16 free upgrade this fall.

Will your iPhone get the iOS 16 update? List of Compatible iPhones

Here’s a complete list of iPhones that will support iOS 16 as per the official reports from Apple: 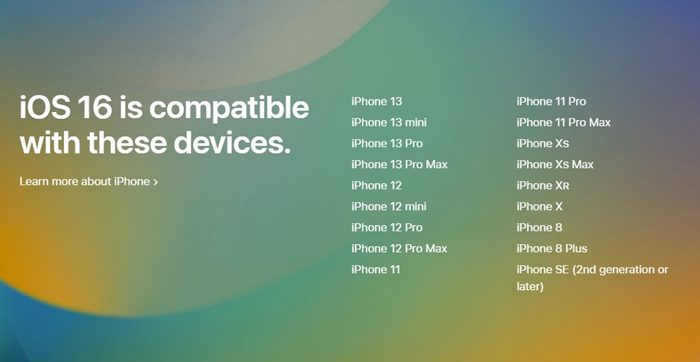 For more details about the supported iPhones & features, check out this official webpage of Apple.

So, these are the list of supported iPhone models for the iOS 16 upgrade. Apple is expected to roll out the final version of iOS 16 in September this year. Meanwhile, you can download the new iOS 16 wallpapers on your iPhone. Also, let us know which iPhone model you are using and is it compatible with iOS 16 in the comments.